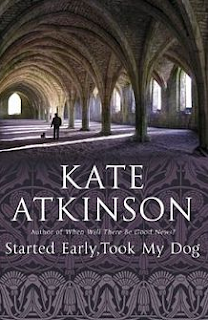 Alas, I fear with this fourth volume in the series, Jackson Brodie might have run out of puff. Perhaps Kate Atkinson agreed, because Started Early, Took My Dog (the title comes from an Emily Dickinson poem; there is a surprising amount of poetry in what is ostensibly a crime novel) is the final Brodie book and she has moved on to different projects.

There is still a lot to enjoy here, particularly in the story of Tracy, ex-copper turned security guard, who impulsively buys a stray child at the start of the novel and spends the rest of the story on the run with her. This is a tale of lost children -- stolen, adopted, bereft and betrayed in various ways. Sadly, though we spend a lot of time with Jackson Brodie, who is a character I like a lot, he doesn't actually DO anything much in this book -- he's supposed to be investigating the biological origins of his client, Hope, but most of the time he just wanders around ruminating while the reader has already put two and two together before he does. And the vile, blokey police culture of the 70s is on full view here -- not as much fun as Life on Mars, which she references.

Reading a Kate Atkinson novel will never be a waste of time, but I must admit I was slightly disappointed in this one. Farewell, Jackson! It was fun while it lasted.