Melbourne Then and Now 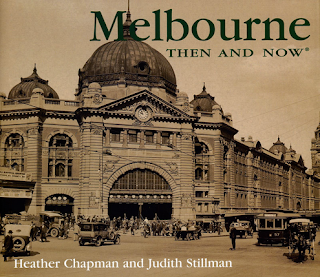 I found this book on my Dad's shelves -- one of many hidden gems tucked away. The silver lining to the arduous and emotional business of clearing out the parental home is that we are constantly making wonderful discoveries, and even Dad admits that without this process, some of his treasures would have remained unlooked-at in cupboards and filed away on bookshelves. At least this way he has actually been able to enjoy leafing through some precious volumes (I'm thinking of the cloud atlas* he bought as an eighteen-year old, carefully stored in its original shipping box).

Anyway, Melbourne Then and Now is a wonderful little book, a simple concept thoughtfully executed. On each double page spread, a photograph of some old Melbourne landmark is married with a modern shot from more or less the same place. Sometimes the buildings are still there, looking exactly the same, with only the surroundings changed; sometimes the original has altered beyond recognition or disappeared altogether. For the first time I realise how Market St acquired its name, and why the Customs House sits where it does (the wharves used to lie directly in front of it).

And if I could resurrect one lost Melbourne building, I would choose the magnificent Federal Coffee Palace. Situated on the corner of Collins and King Streets, its dining rooms could seat 600 patrons, and when it was first built, its dome could be seen by ships at sea. Demolished in 1973, it was replaced by yet another anonymous, boring skyscraper. What a shame! 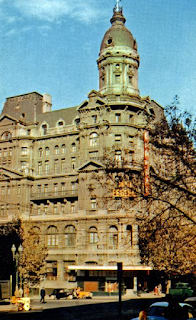 * Turns out a cloud atlas is an actual thing, not just a novel! Who knew?
Posted by A latte beckons at 9:42 AM