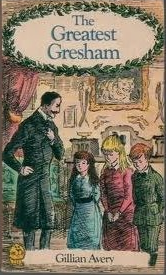 Well, well, well! Barely a month after my last successful visit to Savers, where I found Gillian Avery's The Elephant War, Alice and I paid another visit, and behold! Another Gillian Avery! Do the Savers' staff have a box of them out the back? Are they doling them out when they see me slink through the door?

The Greatest Gresham was first published in 1962, but it's set in Avery's favourite period of the 1890s (though in the suburbs of London this time, rather than Oxford). One one level, it's a charming friendship story, bringing together the timid, respectable Gresham children with their rackety new next-door neighbours, supercilious Richard and imaginative Kate. A secret society is formed, dares are exchanged, and parents are horrified, but everyone learns something in the end.

But on another level, there is a much darker narrative lurking in the background. The Greshams (except for the favourite, little Amy) are timid because they are almost paralysed with fear of their over-bearing, ex-military father, who 'roars' at them and is frequently made angry by his disappointing offspring. In contrast, the Holt children are benignly neglected by their loving but distracted father and aunt. Clever Richard is cramming so hard for a scholarship exam that he makes himself almost physically ill, while dishevelled Kate, who dreams of being a duchess, longs for the order and predictability of the Gresham household. All four of the older children suffer from anxiety to some degree, whether it's caused by terror of their father, fear of what 'other people think', or fear of academic failure. In the end, it's spirited Amy and bold Aunt B, who refuse to be bound by others' judgements, who come out winners.

A delightful book, but also a very good one.