Shakespeare: The World As Stage 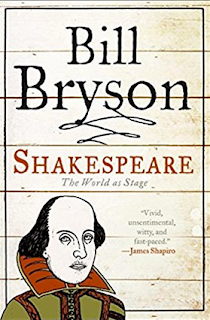 There are few more engaging companions on a non-fiction journey than Bill Bryson. I have gone with him happily on trips around Australia, explorations of the history of the English language and the domestic home, and many others. So it was a canny move by the publishers of this Eminent Lives series to hire Bryson to deal with what must surely be their most problematic subject: William Shakespeare.

The problem is that although Shakespeare left behind the richest body of work in the English language, he left us almost zero information about his personal life. Not even his birth date is certain. This hasn't prevented a tidal wave of speculation about his loves, career, even his identity; as Bryson points out, it's not that the world needs another book about Shakespeare -- it's that this series does.

If anyone is skilled at spinning an interesting tale out of a bare handful of recorded (and contested) facts, it's Bill Bryson. And Shakespeare: The World as Stage tells us a lot of very engaging stuff about the Elizabethan theatre, publishing, London, class and religion in Shakespeare's time. But -- and this is not Bryson's fault -- it tells us next to nothing about the man himself. It is truly amazing that so much mystery still surrounds this most luminous of literary figures. Was he gay? Why did he leave his wife their 'second-best bed'? ( I suspect a coded message...) What was he up to in the 'lost years'? We don't even know for sure what plays were written when, or even in what order.

I'm still glad I read it, though, because it succinctly filled in some useful background to the events of  Antonia Forest's The Players and the Rebels. Which reminds me, I still need to get The Player's Boy! I feel a Christmas present coming on...