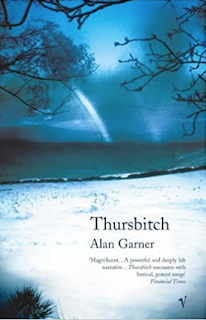 After the publication of Boneland, Alan Garner said that he regarded all his nine novels as really one novel: after reading Thursbitch, I think I understand what he means.

Thursbitch (named for a valley in the Pennines) is an adult novel. It grew from a (real) memorial stone by the side of a track, which reads Here John Turner was cast away in a heavy snow storm in the night in or about 1755; the print of a woman's shoe was found by his side in the snow where he lay dead.

From this mysterious seed, Garner weaves a double tale, of two couples separated by time: Jack and Nan Sarah in the eighteenth century, and Ian and Sal in the twenty-first. Jack is the guardian of an ancient rite, and a jagger -- a travelling trader; Nan Sarah is his wife. Ian is a scientist and a priest, Sal a geologist; they were once a couple, but now Ian is Sal's carer as she grows slowly weaker from a degenerative illness. Their twinned stories, of faith and ritual, different kinds of knowledge, illness and grief, cross and divide through time but not through space, echoing and united in this place of grim power with its standing stones and ancient springs.

I found many resonances with the later Boneland, which also centres on a grief-struck and suffering man, as well as Red Shift, which also uses the technique of parallel narratives. Though Thursbitch is a slim novel, there is much meat to chew on. One day I will read all Garner's novels back to back. What a rewarding experience that will be.