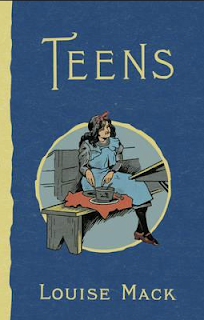 Teens is a funny little book, the first fiction title published by Angus & Robertson, a YA book before such a thing existed. The title makes it sound as if it might be a contemporary of The Outsiders, but in fact it was first published in 1897!

The author, Louise Mack, later became the first female war correspondent and a war lecturer, mixed with the bohemian set of Sydney and London and by all accounts was quite the flamboyant eccentric. She was a school friend (and sometime rival) of Ethel Turner, and indeed the close friendship between Lennie and Mabel described in Teens is partly based on their relationship at Sydney Girls High School.

Despite being first published 120 years ago, Teens is a fresh and lively read, often very funny, and with a welcome lack of moral preaching that can mar even the greatest of antique children's books (I'm looking at you, Little Women, and even you, Anne of Green Gables!) Lennie and Mabel play pranks, squabble, are fired with inspiration, slump and triumph and grieve like all young adolescent girls.

Teens may not aspire to the heart-wrenching emotional heights of Ethel Turner's Seven Little Australians, but it is still a delightful peep into a lost world, and deserves not to be forgotten. Thanks to Suzanne, for passing it on.