The Weirdstone of Brisingamen 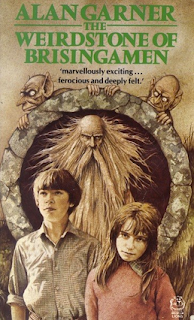 I have no memory of reading The Weirdstone of Brisingamen as a child; I think the first Alan Garner book I read was Red Shift. I do remember picking up a copy a few years ago at a library book sale, opening it at random and hastily putting it down again -- not for me. Should I admit, as an author of several High Fantasy books, that it's a genre I find more fun to write than to read?

But since I've been on something of an Alan Garner bender lately, and I've read both Boneland and The Moon of Gomrath, when I stumbled across another copy of Weirdstone in a secondhand bookshop, it seemed like a sign to go back to the very beginning of the trilogy -- or the ennealogy, as Garner has said that his nine novels all form one story.

The Weirdstone of Brisingamen is a beloved part of many people's childhoods, as witnessed by the disappointed outcry in some quarters when Boneland appeared and didn't fit the same pattern of elves and svarts and high-flown language. I must admit, the satisfaction for me lay mostly in seeing the links with Boneland. Of its type, The Weirdstone is not bad -- the story is full of tension and atmosphere. But the two children are barely distinguished as characters, and in the latter part of the book they have no agency at all, just tagging along with the adult farmer Gowther and their two valiant dwarf companions for the final pursuit and confrontation.

Alan Garner has described this as 'a fairly bad book'. I wouldn't go that far, though it is certainly the book of a young writer, still developing his subject matter and working out a style to go with it. I'm very thankful that he didn't get stuck in this groove. Perhaps today, having had one massive success with this book, he might have met with greater pressure to produce more of the same. I have the feeling that The Weirdstone was very influential on later writers. Garner didn't need to write more books like this; other authors did it for him.