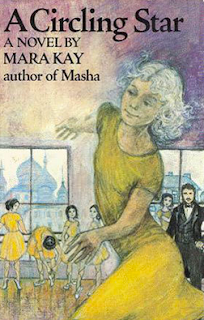 I bought Mara Kay's A Circling Star because I'd seen so many loving remembrances of Kay's Masha books by people whose tastes I share. A Circling Star is not a Masha book, and I'm guessing it's one of Kay's lesser works. Like the Masha novels, this one is set in Imperial Russia (it took me ages to work out that it was in the 1850s). It tells the story of cheeky, impulsive Aniuta, who is sent to join the Imperial Theatre School (a real place!) to train for the Bolshoi Ballet. Students had their board and education fully paid for by the Emperor, and those who didn't make the grade as dancers were shunted into the drama course, or ended up as prop makers or scenery painters.

It wasn't until I'd nearly finished the book and was doing some idle googling that I discovered that some of the characters in the novel were actually real people, too! Anuita's love interest, the intense Liev Ivanov, who writes a ballet especially for her and whose heart she breaks, ended as a renowned choreographer (not as handsome in his Wikipedia photo as he is described in the book), responsible for The Nutcracker and parts of Swan Lake. Other teachers at the school, actors and dancers, also proved to be historical figures.

Published in 1973, A Circling Star felt much more old-fashioned. It was a comforting read, even though it was shot through with the usual rivalries and treachery common to ballet books, and the (to me) unusual setting lent it added interest. I think the Masha books would be better, though!