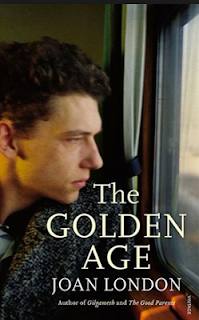 How time flies! I remember that Joan London's slim novel, The Golden Age, made all the best-of-the-year lists when it was published, which I vaguely thought was about a year ago? But now, it was way back in 2014.

I really enjoyed this novel. Short chapters, clear, vivid writing, poignant characters -- an easy read, but not a dumb one. Set in Perth in the mid-1950s, it centres on two young patients at a polio facility (the eponymous Golden Age, a pub in its former life), thoughtful Elsa and aspiring poet Frank, the son of Hungarian refugees. There's not a lot of plot, but the story meanders gently and tenderly between its characters, touching them lightly then moving on. My only quibble was the rather abrupt ending -- I wanted it to go on much longer, which is not something I often say these days!

I definitely want to read London's other novels now. This was beautiful. I've even lent it to my mum, who says she can't read books any more. I'll let you know how she goes with it.
Posted by A latte beckons at 2:11 PM