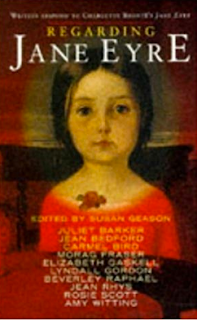 This book was a gift from my beloved in 1997 -- it must have been one of the first presents he ever gave me. Regarding Jane Eyre (ie both looking at Jane Eyre, and about Jane Eyre) is a collection of essays, letters and short stories which comment on, argue with, and riff off Charlotte Bronte's novel. Carmel Bird delights in the rich imagery of the novel (fire, redness, ice, windows and wombs); Rosie Scott argues that the intense and harrowing opening of the story doesn't match the controlled fairy tale of the ending. Amy Witting supplies a parallel narrative through the figure of Jane's imagined school friend, Mary Ann; Jean Bedford writes a modern alternative to Jane's tale, with a very different ending.

A thoroughly enjoyable commentary on a classic text -- and it's Australian!