Taste: The Story of Britain Through its Cooking 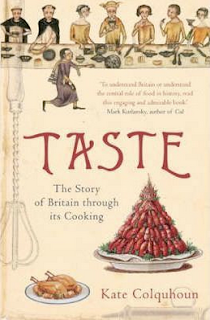 There are some books that you can't (pardon the pun) consume in one bite. Ooh, that sounds interesting, I thought, when I came across Kate Colquhuon's Taste: The Story of Britain Through its Cooking on Brotherhood Books -- and don't get me wrong, it was interesting!

But I couldn't have sat down and devoured it in one sitting (for one thing, it's pretty thick). Chapter after chapter detailing extravagant feasts, the evolution of cooking techniques and shifting meal times, the rise and fall of ingredients as the world of trade expanded availability -- if I'd tried to swallow it in one go, it would have proved indigestible. Instead, I rationed myself to one chapter a day, and slowly consumed a dose of British history through the prism of its food and cooking.

From the evidence left in prehistoric middens (butchered bones, cheese sieves), through medieval feasts and the Elizabethan addiction to sugar (some things don't change much), to the pineapple fad of the eighteenth century, the demise of the household cook, wartime rationing and the rise of the 'foodie', Taste leads us through the centuries and shows how social history and food go hand in hand.

As a fan of the BBC's clumsily titled The Supersizers Go... which featured Sue Perkins and Giles Coren sampling the food of different eras with a comic twist, and the recent Australian show Back in Time for Dinner, which also mixed food and history, I was always going to find Taste hard to resist. It was highly educational: the Victorian underclass were literally starving on a diet of adulterated bread and not much more; at the end of the nineteenth century, there was apparently 'a small chain of Australian restaurants in London' (who knew??); and many many more intriguing titbits.