In the Teeth of the Evidence 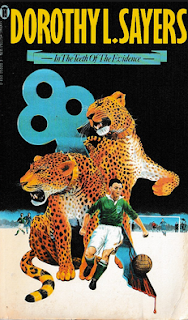 I picked up In the Teeth of the Evidence from my favourite secondhand bookshop, Brown and Bunting, because I couldn't resist a Dorothy L Sayers, even though this one is short stories and I generally steer clear of short stories (why? I used to write them!) Only two Wimsey stories here, several featuring the observant travelling salesman, Montague Egg, and a few more with random narrators, some humorous, some creepy.

This was an interesting reading experience, and historically educational, because many of the stories in this volume turn on a single plot trick, often centred on a quirk of 1930s technology -- the specifics of a pair of telephones connected in parallel, to enable someone to fake being miles away while they were actually in the next room; a 'repeating' alarm clock, which apparently chimes the last hour gone if you wake in the night and can't read the clock-face. Even my ancient mother had never heard of that one.

I do honestly believe that reading books like this are the best way to immerse yourself in the everyday detail of the period -- the way households run, the way people talk to their peers, to their doctor, to their servants. Often modern stories set in the past strike a slightly 'off' note, particularly around social mores. It's the things that are left unsaid, the unspoken assumptions, that are the most fascinating element of stories like these.