Summer of My German Soldier 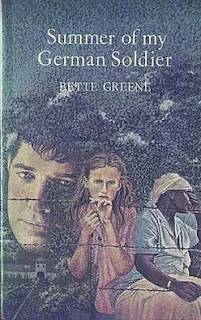 Summer of My German Soldier by Bette Greene is one of those classic books that I had never quite got around to reading -- perhaps because it's American, and I tend to neglect the American canon (my bad).

First published in 1973, the novel is narrated by 12 year old Patty, daughter of small town storekeepers in middle America in the middle of World War II. A group of Nazi prisoners of war is stationed nearby, and when one of them escapes, Patty makes the momentous decision to shelter him.

I expected a lot more of the book to be devoted to Patty and Anton in hiding, but in fact she only shelters him for a very short time (though with huge consequences). Much of Patty's background is autobiographical, including the loving Black housekeeper Ruth, who stands in stark contrast to Patty's cold and frankly brutal parents.

I was actually really shocked by how cruel Patty's father is to her; he regularly beats her with a leather belt to the point where she loses consciousness. The obvious parallels are drawn between the domestic brutality of Patty's father and the political cruelty of faraway Hitler. The power of love is raised to counter the horror, but with only limited results. Patty's parents never give her the love she craves, Ruth is helpless to save Patty from the consequences of her actions, and Anton's story has a tragic end.

This is a powerful, sobering story, though old-fashioned in the telling. I'm glad I finally gave it a go.