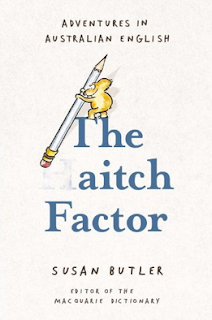 Another speedy, fun read. Susan Butler has been editor of the Macquarie Dictionary since the 1980s, so she is well placed to comment on the various controversies and dilemmas of Australian language.

The Aitch Factor is essentially a collection of short pieces, like newspaper columns, on a bewildering variety of topics -- aitch or haitch? Maroon or marone? (I was surprised to learn that marone is exclusively Australian, probably a pseudo-posh pronunciation.)

There are also insights into how the dictionary is produced and the criteria used to decide whether a new word or usage makes the cut. Some of Butler's predictions (the book was published in 2014) have come true, some have proved misplaced, which goes to show that even an editor with her finger right on the pulse can get it wrong. For example, she dismisses doing a Steven Bradbury as already extinct, and credits having a barry of a day as still persistent. But I'm sure I've heard references to doing a Steven Bradbury more than once just in the past week, whereas I can't remember ever hearing anyone saying they're having a barry today.

But then, language is one area where we can all claim to be experts, even if we're not. This is a great book for dipping, and all the more interesting because, unlike most books about the English language, it's Australian-focused.
Posted by A latte beckons at 11:02 AM