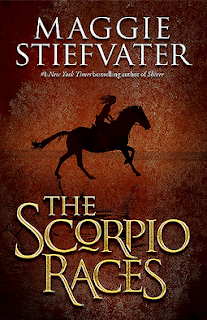 This month's theme for the Convent Book Group is Horses. As a child, I read pony books and ballet books with equal fervour, though I actually had ballet lessons and I had only once in my life sat on the back of a horse. I longed for a pony, though I don't know what I would have done with one if I'd managed to get one. It was all theoretical, but I never gave up loving the idea of owning and riding a horse of my own.

But the horses in The Scorpio Races are not tame, dependable companions. The capaill uische are mythical Celtic horses from the sea -- fierce, wild and lethal. They literally eat people. And on the island of Thisby, the locals catch these horses, tame them as much as they can (using magical charms), and once a year, they race them. Sean Kendrick has won the Scorpio Races four times. Puck Connolly needs to save her family home. They both have a lot at stake, but by the end of the races, they will be risking even more.

This is a thrilling adventure, where the only overt magical element is the wild, terrifying horses. It's also a great love story -- I got chills down my spine toward the end. Maggie Stiefvater is just a terrific writer, knotting plot and atmosphere, emotion and action, into a tight and satisfying pattern.

The only uneasy aspect of this book for me was that I had trouble pinning down exactly when it was supposed to be taking place. There were cars, and radios, but no computers. The characters talk like twenty-first century people; it wasn't until I was about halfway through that it occurred to me to wonder about the time-setting. Unfortunately, the fact that I couldn't place it made the rest of the novel feel a bit slippery. But overall, that's a minor flaw in a very strong YA novel.
Posted by A latte beckons at 2:04 PM