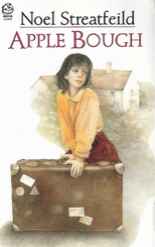 I've seen reviews of Noel Streatfeild's Apple Bough in which people say that they dislike the book because the parents are so awful. Well, awful parents are nothing new in the Streatfeild-verse, let's face it, but I actually don't think that these particular parents are so terrible. In fact I have a soft spot for this book and I enjoyed re-visiting it.

Sebastian Forum is a violin prodigy and for years his whole family has travelled the world as he tours the globe. The children's parents, Polly and David, are thrilled with this arrangement, but as time goes on, Sebastian's siblings become increasingly disillusioned and homesick and put in place 'Operation Home.'

It's true that David and Polly are protected from the children's true feelings until quite late in the book, but once they are informed, they don't stand in the way. Polly is another distant Streatfeild mother, wrapped up in her own work (she's an artist), not at all hands-on, but loving in her own way. The Nanny role in this book is filled by the delightfully efficient Miss Popple and also the charming tutor Paul (I have a bit of a crush on Paul). It's really enjoyable to see the other children working their way into making the most of their own gifts -- Ettie in ballet, Wolfgang acting and composing -- but my favourite character is the eldest sister, Myra, whose strength is wisdom and encouragement. By the end of the book, it's clear that Myra will the one member of the family who will provide a solid base for the high-fliers to return to. And that is a very worthy role, too.

Apple Bough is a splendid comfort read.
Posted by A latte beckons at 10:34 AM