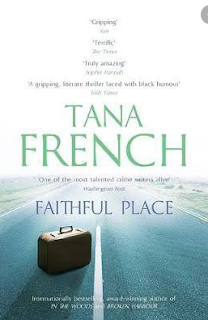 Yes, it's another Tana French. Faithful Place is the fourth in the Dublin Murder Squad series, and the earliest novel of French's that I've read yet. This book provides the background to the relationship between hardbitten Frank Mackey, his daughter Holly, and ambitious young detective Stephen Moran, which was touched on in The Secret Place.  But in that book, Holly was sixteen; in Faithful Place, she is just nine.

This is another terrific crime novel, but it's also about family, inheritance, memory and loyalty. Twenty years ago, Frank Mackey escaped from his abusive father and poverty-stricken neighbourhood; but a chance discovery drags him home, and back to the past he thought he'd left behind.

Mackey believes he is utterly different from his violent, brutal father, but we can see that he still carries the legacy of that cruelty and violence just beneath the surface. With his marriage broken, Frank's love for his young daughter is the strongest force in his life, and there's nothing he wouldn't do to protect her. Life in Faithful Place seesaws between protecting family, and hurting family, but a weird code of honour and shame coats everyone's behaviour. It's easy to forget just how hamstrung by religion Ireland was until very recently, maybe still is, for all I know -- a first world nation where abortion and contraception were outlawed means that women's sexual lives are strictly regulated, marriage was often early, and unwanted pregnancy meant unwanted children.

I smugly thought that I'd solved this story about halfway through, but I was too clever for my own good. The ultimate solution was less tricky, but more realistic, than the one I dreamed up. Another deeply satisfying crime novel.
Posted by A latte beckons at 3:15 PM