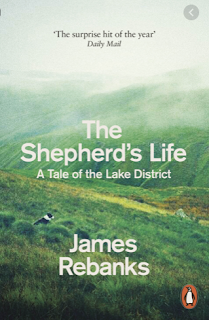 James Rebanks' unexpected 2015 bestseller, The Shepherd's Life, chimed well with my recent readings of Underland and Alan Garner -- and also with Tyson Yunkaporta's Sand Talk. Rebanks is part of a farming family in England's Lake District: Beatrix Potter country. For generations, his ancestors have farmed sheep on the fells, and he has witnessed the rise and fall of farming fads, eventually returning to the traditional methods of managing sheep on these marginal lands.

His connection to the land is unbreakable; he glories fiercely in the deep family connection to farming that stretches back for hundreds of years, and which he in turn is passing to his own young children (though he accepts that they may or not not also become farmers). He is no fool, and doesn't suffer fools either, like well-meaning outsiders who take a more romantic view of the countryside and see the sheep and the farmers as a picturesque decoration rather than an integral part of the landscape. His people are proud and prickly, and that comes through forcefully in his prose.

Just as when I read Alan Garner's Stone Book Quartet, I was struck by the parallels, half a world away, with Australian First Nations' visceral connection to country and how these English authors experience their own deep roots in the land. It's not the same experience, but it chimes, and it makes me wonder if all traditional societies share this fundamental sense of connection to the landscape -- if it's a universal experience that modern, mobile societies have lost.

The Shepherd's Life is divided into seasons and describes the rhythm of the farming year; the book also traces Rebanks' own life. He drifted through school and didn't think much of it, dropping out as soon as he could to help on the farm. But clashes with his father contributed to driving him back to education. He ended up at Oxford (he describes wryly how he found himself suddenly rebranded locally as 'clever') and now finds himself a writer. (I didn't know it, but he has a new book out: English Pastoral.) I've also just discovered a Conversations podcast with Richard Fidler which I am now itching to listen to.