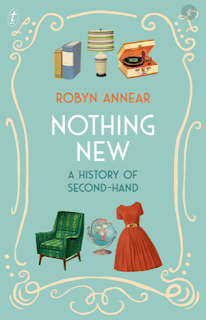 Robyn Annear is a prolific Melbourne writer (actually I think she lives in Castlemaine) but I'm aware of her from her history of early Melbourne, Bearbrass, and A City Lost and Found, which is the story of Whelan the Wrecker. It's not surprising that she's chosen to turn her pen to a history of second-hand -- well, everything! (Ironically Nothing New is one of the few books I've read lately not sourced from that massive trove of second-hand reading matter, Brotherhood Books; I borrowed this one from the library.)

Nothing New examines many different aspects of secondhand goods and trading, but focuses particularly on clothing. In the olden days, there was no such thing as vintage -- clothes were worn, cut down, and adapted until they simply wore out, whereupon they were transformed into multi-purpose rags. Everyday clothing doesn't get preserved for museums, which is why the historic clothes we see on display tend to be strictly for special occasions - silk dresses, bridal gowns and parade uniforms.

Annear also looks at the enormous trade in used clothing in Africa, the valorisation of mending and making do during times of shortage during the First and Second World Wars, and the subsequent backlash in the 1950s when consumers were encouraged to throw out the old and embrace the new in order to help the economy along.

These days we are encouraged (perhaps vainly) to reuse and recycle what we can, but at the same time, society isn't organised to facilitate this. It's almost impossible to get major appliances repaired -- why would you, when it's just as cheap to buy a new fridge or washing machine? I'm constantly horrified by participants on House Hunters who cast an eye over a perfectly functional kitchen or bathroom and pronounce that it 'needs to be updated.' Does it, really? Having lived in many houses with sub-standard kitchens and bathrooms and survived perfectly well, I can tell you that having everything new might  be nice, but it's by no means essential.

There is, however, a sub-section of society (which clearly Annear belongs to) which celebrates the pre-loved, the historic, the shabby, the characterful. My sister-in-law is currently making a fortune connecting discarded items with new owners. Long may she and her kind flourish.