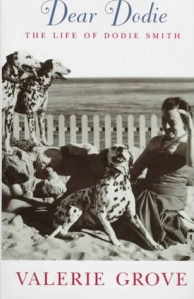 I first came across Dodie Smith as the author of the beloved children's classic, The Hundred and One Dalmatians. I'd enjoyed the book as a child but came to a deeper appreciation of it when I read it to my own girls -- it was one of the few books, apart from Harry Potter, that both my daughters loved and demanded repeat readings of. It was so warm and funny, so witty and clever, with jokes for adults as well as children, and the illustrations were so charming, that I never minded going back to it. The sequel, The Starlight Barking, was a little weird, with a science fiction/mystical premise; that wasn't such a big hit, but still enjoyable.
I was well into adulthood before I encountered Smith's second best known work, I Capture the Castle (originally written as an adult novel, but now regarded as YA). What a beautiful, moving, eccentric, yearning novel -- I'm so sorry that I missed it as a teenager, I would have lived in it. It's rapidly become one of my very favourite books.
Then I found another novel, It Ends in Revelations, in a second hand book shop -- quite a modern take on homosexuality, for its time, I thought, but not amazing. I had no idea that Dodie Smith had enjoyed a stellar career before the war as a playwright, long before she wrote any of the books that have remained her lasting legacy. She and her husband Alec moved to America when the war began, so that Alec, a pacifist, could avoid conscription. They remained there for fifteen years, with Dodie earning a comfortable living working on Hollywood screenplays, but she always felt guilty and conflicted about the move, which she regarded as a betrayal of her country, and more pertinently, as cutting her off from public sentiment in England. She was never able to recapture her former success as a playwright, even after returning to England and remaining there until her death.
No wonder she had enlightened ideas about sexuality; half her friends were gay, including Christopher Isherwood, and she was also a good friend of Julian Barnes, who eventually became her literary executor. In later years, she and Alec lived in virtual seclusion in a country cottage, content with their many Dalmatians (naturally) and a beautiful garden (Alec) and writing her autobiography (Dodie). Over her lifetime she wrote endless letters and diary entries, all of which Valerie Grove must have read to produce this biography.
Grove is quite judgemental about Dodie and describes her as 'self-indulgent' and 'pampered,' which is no doubt true, but she was also determined, humorous, generous (when she had money) and thoroughly enjoyed life's pleasures. In her youth she was an (unsuccessful) actress and then worked in Heals, a furniture shop, where she set out to seduce the much older owner and had a long affair with him, before marrying the young, handsome and devoted Alec. So good for her!
I think I Capture the Castle is by far her best work, and it showcases her best attributes: clear-eyed self-reflection, whole hearted emotion, appreciation of beauty, and a wry, witty sense of humour.
Posted by A latte beckons at 11:25 AM