A Nursery in the Nineties 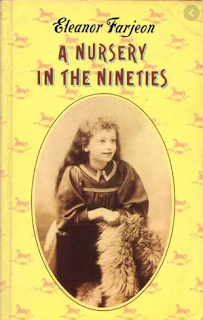 I ordered A Nursery in the Nineties because someone in the Antonia Forest Facebook group mentioned it, and it turns out that the pertinent section comprised just one short chapter out of 53 in this memoir by Eleanor Farjeon.

Eleanor Farjeon (1881-1965) is best known as the author of The Little Bookroom (after which our beloved Melbourne children's bookshop was named) and also the words to the hymn Morning Has Broken (which I sang regularly at school assemblies), but she also wrote poetry, plays, history and biography. Much of A Nursery in the Nineties tells the stories of her father (emigrated to New Zealand, admired Dickens, worked as a journalist), and her mother (from an American theatrical family) before and after their marriage; the last part deals with Nellie's own childhood. Her family moved in theatrical and literary London circles, and many of the names she drops are forgotten now, but she enjoyed a happy, secure and creative upbringing along with her three brothers. She includes plenty of fascinating quotidian detail about Edwardian life which is worth reading (though the family histories drag on a bit).

The chapter that most interested me (and the whole reason I bought the book) is called TAR, standing for Tessie-and-Ralph, a game she and her older brother played (with occasional input from their younger brothers) for over twenty years. She and Harry would pace for hours, narrating and acting out stories of their own invention based on their favourite characters -- originally Ralph and Tessie, from a children's play they saw when Nellie was five. Harry would announce, 'We are X and Y' (perhaps from The Three Musketeers, Greek myths, or any other story that had gripped their fancy) and then he and Nellie would plunge into absorbing parallel lives, until Harry was forced to halt the game by declaring 'We are Harry and Nellie' again.

Farjeon says that this private game absorbed so much of her attention and emotional life that it really became her life, far more real and vivid than her everyday existence, and reflects that ultimately it was quite unhealthy.

I had no desire for new adventures, friends or experience, outside this powerful game. When I should have been growing up, it was a harmful check on life itself, for its imaginative extension did not include natural knowledge. Because of it, I was never aware of my own sex until I was nearly thirty years old, and it took least ten years more for emotional crudeness to get abreast of mental ripeness.

What an extraordinary admission! Though Farjeon credits TAR with turning her into a writer and giving her 'flow of ease,' it's notable that she never married or seems to have had any adult relationship. The Facebook reference came up during a discussion of Antonia Forest's Peter's Room, which also deals with a group imaginative game which spirals out of control, and which in turn references the Bronte's Gondal games and writing.

This is a topic of particular interest to me. Though I didn't share it with anyone else, all through my childhood and teenage years I had a similarly absorbing and addictive private fantasy life. Unlike Eleanor Farjeon, I deliberately renounced it at eighteen (though there were many later lapses), I think because I realised that the potential dangers that she describes above might be lying in wait for me. I'm trying to write about this experience now. If anyone knows of any similar stories, I'm all ears!