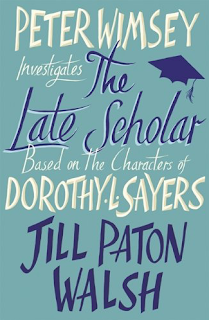 The Late Scholar, the fourth of Jill Paton Walsh's novels based on Dorothy L. Sayers' characters, returns Peter and Harriet to Oxford, the setting of perhaps their best-loved adventure, Gaudy Night (it was definitely the one I loved best), the book where Harriet finally allows Wimsey to persuade her to marry him. With Harriet teetering on the acceptance of love, Gaudy Night was more romantic than Busman's Honeymoon, where they sickeningly consummate their long courtship.

Anyway... it's always lovely be back at Oxford, even with murder victims dropping like flies, and what seems like a very personal connection to Harriet, as each murder echoes a plot from one of her books, which in turn echo Wimsey's previous cases (this neatly absolves Paton Walsh from having to come up with a murder method of her own). The plot turns on a choice St Severins college must make, between selling a valuable medieval manuscript to buy land, or keeping the manuscript and going broke; the members of the college are evenly divided and Peter, as Visitor to St Severins, must help them decide, as well as stem the growing body count and track down the missing Warden.

The subtext of the book concerns what is most valuable: knowledge, property, money, truth? Tradition and duty or personal preference? Harriet and Peter's eldest son has decided not to follow in Peter's footsteps and go to Balliol; instead he chooses the much more practical option of agricultural college. I must admit I didn't really see what the fuss was about with this one, since their second son seems pretty keen to go to Oxford, and as Peter is a second son himself, it's hardly smashing a family tradition if the eldest son doesn't go. But in general I enjoyed the philosophical musings.

The only Walsh/Wimsey I haven't managed to find so far is Thrones, Dominations. I've relished these extensions to the Dorothy Sayers universe, so I'll definitely keep an eye out for that one.