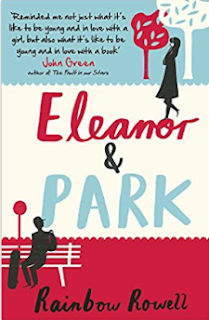 It's taken me a long time to catch up with Eleanor and Park. I enjoyed Fangirl, Rainbow Rowell's second novel, but Eleanor and Park is even better. I should say that my younger daughter had already read it and wasn't too enthusiastic -- she found Eleanor unlikeable and the ending anti-climactic -- so I was a bit wary going in; but I was completely sucked into Eleanor and Park's story, their friendship that turns to romance, and their family difficulties.

I enjoyed the fact that neither of them are conventionally gender conforming -- Eleanor is a big girl, and wears quirky men's clothing, while Park experiments with eyeliner and hair gel. But their clear appreciation of each other's physicality is delightful. I also enjoyed the mid-80s setting and music, which reflected my own adolescence. Eleanor has a frankly ghastly home life, with the sinister presence of her step-father, Richie, a catastrophe waiting to explode. Park, in contrast, has a loving and supportive family, though his father struggles with Park's seeming lack of typical masculinity.

This is a really good, moving, YA romance. I'm not surprised it's been such a hit (though not with my daughter). The cover of my copy, seen above, is not great -- there is no way that neat, slim silhouetted girl could be Eleanor! Read the bloody book, cover designer!