How To Tell The Bulldogs Apart, Part 1

And so the heady euphoria of the pre-season gives way to the painful reality of Round 1: a 36 point thumping by Collingwood. Ouch.

Suddenly all those giddy hopes that 2010 will be The Year of the Dogs, the media hype, the seemingly miraculous resurrection of Barry Hall, have been punctured. Hangovers are never pleasant, and all the worse when they're self-induced. But at least there is comfort to be gleaned in the reflection that there are still 21 games to go. It's a long season; anything can happen... can't it?

In the un-Bulldog-like spirit of not giving up hope at the first hurdle, I hereby embark on the first of a series of player profiles. Warning: this series will contain no more than trace elements of actual football information. It is designed to share the stuff that I find interesting. It is perfectly possible that no one else will agree. It is also quite likely to be wildly inaccurate.

And so, in numerical order, players 1-5:

1. Jarrad Grant
Future goal-kicker. Young, tall and spindly. Has only played one senior game and kept getting knocked over. May be the first Vulcan to play AFL football. 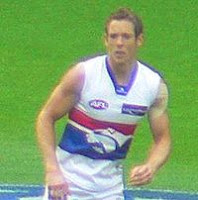 Goal-kicker. Not your average footballer. Writes a weekly column in The Age about the romance of football, among other stuff. Creative and clever on the football field as well as off it. Hurt his knee last year but was back to his twisty-turny best yesterday. My favourite Bulldog.

3. Andrejs Everitt
Goal-stopper. Young and rangy, hasn't played often. St Kilda tried to grab him in the pre-season draft so he must be good, right? Sulked last year because he wasn't playing often but seems to be trying harder. Used to have dreadlocks but perhaps realised that they weren't helping in his quest to be taken more seriously.

4. Daniel Cross and 5. Matthew Boyd
Sorry, I still have trouble telling these two apart. The busy Bobbsey Twins of the midfield, they both rack up heaps of possessions without being particularly noticeable. Boyd was picked in the All-Australian* team last year, one of only two Bullies selected.

* An odd and purely hypothetical concept as there isn't really anybody for them to play.
Posted by A latte beckons at 10:05 AM