How To Tell The Bulldogs Apart, Part 2

Goal-kicker. Our captain. Already ancient, he may well play until he's 80. Known as the Smiling Assassin. Because he's always smiling. Except when he's swearing. Just played his 350th game.

7. Shaun Higgins
Goal-kicker. Possessed of a large head and walking with a swagger, Higgins will probably be our next captain. Club legend Scott West personally chose him to inherit his number, which is like being anointed by John the Baptist.

9. Lindsay Gilbee
Goal-stopper. Supposedly the best kick in the league. Would be nice to see evidence of this more often. His dad died last year. 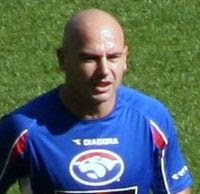 Mid-fielder. Known, entirely predictably, as the Bald Eagle. Senior players took a pay cut so he could play for one more year.

More tomorrow!
Posted by A latte beckons at 7:32 AM