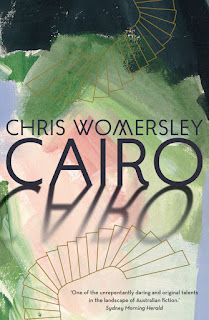 I have never lived in the famous Cairo flats described in this novel by Chris Womersley, but I have two friends who did, so I feel I know the setting pretty well. Tom, the protagonist, is eighteen in 1986, when the events of the book take place; in 1986, I was nineteen. Near the start of the book, Tom sees crowds of uni students flooding the streets around Carlton and Fitzroy, and muses that he should be among them (he neglects to enrol) -- I actually was among them. So this book is very much on my turf, and I have to admit that nostalgia was the main reason I wanted to read it.

Tom Button is a naive country boy who engineers an escape to the big city and falls in with a crew of bohemians clustered around his neighbours at Cairo, the alluring Max and Sally Cheever. Of course Tom falls in love with Sally, but he also gets mixed up with the theft (and forgery) of Picasso's Weeping Woman from the National Gallery, a real Melbourne crime that remains unsolved.

If not for the nostalgia value, I would have struggled with the first half of the book. It's very languidly paced, and at times the florid prose teeters on the verge of being over-written, as if Womersely is trying to channel F. Scott Fitzgerald or Lampedusa. While many landmarks and even characters were familiar, Tom's bohemian chums seem to have strolled in from a different decade, perhaps a different continent. But the story gathers pace in the second half, once the actual theft is committed, and from then on I was fully engaged. I ended up really enjoying the novel, once the prose settled down a bit.

How much do I love Google, by the way? It's so easy to look up Cairo itself and remind myself of its unique atmosphere. What a gorgeous place. I bought a copy of this book for one of my friends who used to live there, so I've actually bought it twice. There's not many books I can say that about. A fitting book to end 2015 on.
Posted by A latte beckons at 11:47 AM