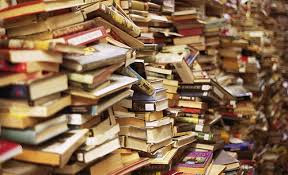 Is it disturbing that I bounded out of bed this morning, eager to commence this analysis of the past year's reading, when the past year is barely gone? I'm a Virgo, what can I say!

This year I read a total of 71 books, much lower than last year, which was lower than the year before. I had a long bare patch where there was family drama going on and I was too exhausted to read more than magazines, and I think I read more long adult fiction, which chews up more time. Anyway, let's see the breakdown: 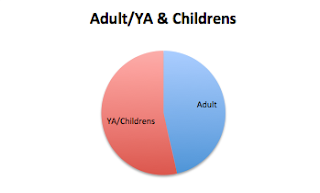 Once again, the split was about 50/50, slightly favouring kids books, which are after all generally shorter and quicker to read (I read seven Rumer Godden books about dolls in about three days... cheating? I don't think so!) 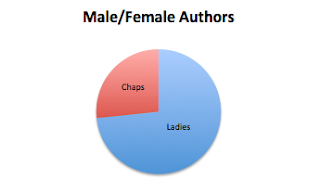 Sorry chaps, no attempt at gender equality this year at all! Though on the plus side for the gentlemen, I will say that some of my favourite books this year were written by chaps -- but more of that later 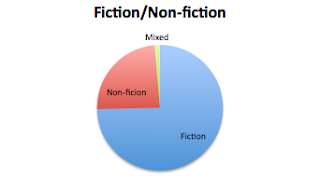 Overwhelming preference for fiction this year, though the proportion of non-fic has increased. I tend to look at non-fic as work, and fic as pleasure, though perhaps I should re-evaluate this attitude in light of what I'm going to say below... One title was an anthology, a mix of fiction and memoir. 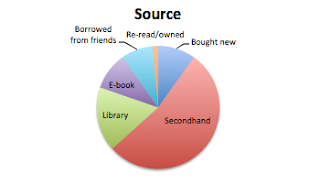 The proportion of secondhand purchases is up, the proportion of library borrowings is down. Maybe I just didn't have time to go to the library much this year. Nearly all those borrowings were for book group... The number of e-books I bought was exactly the same! The number of books bought new is waaay down, oh dear. And I only re-read one of the books I already owned. Makes you wonder why I hang onto so many of them, doesn't it! Actually I did a bit of a purge this year -- well I had to, there were so many 'new' secondhand books coming in, those 38 books have to live somewhere. My Brotherhood Books habit shows no sign of abatement, in fact I got a BB voucher for Christmas. It's a charity, you know...! 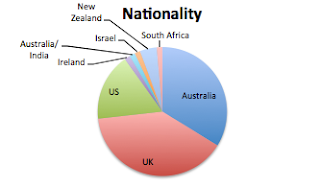 Multiple bloody Rumer Goddens bumped up my UK total. Quite a few New Zealand titles this year. But again, shamefully, not a very ethnically diverse list. Even my attempts to read some YA from other countries ended up being books written by Americans... Must try harder. Loads of Aussies though. Aussie Aussie Aussie, oi oi oi! 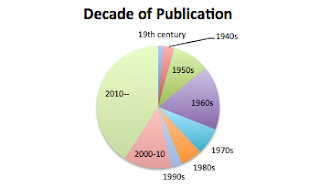 So it looks like about half my reading comprised new books, published since 2000, and more than a third are really new, in the last five years. Pretty happy with that. My love of books from the second half of the 20th century is evident, with again lots of Rumer Godden and Hesba Brinsmead titles pushing up the scores. Unapologetic. You should know my tastes by now!
* There was a hiccup this morning when all the graphs I spent so long creating disappeared. Hopefully they are back in position now. Thank you Evie for tech support...

My Favourite Books of 2015
That is, my faves of the books I read during last year, not published then. Nearly all non-fiction, as it turns out, which I did not expect. In no particular order:
H is for Hawk by Helen Macdonald: moving, unsparing, cathartic
Sapiens: A Brief History of Humanity by Yuval Noah Harari: engrossing, stimulating, brilliant
How Buildings Learn: What Happens After They're Built by Stuart Brand: fascinating, detailed, nerdy
Wild Places by Robert Macfarlane: beautiful, inspiring, meditative
And of the fiction, I especially enjoyed Geraldine MacCaughren's The White Darkness, Ellie Marney's Every series and Karen Joy Fowler's We Are All Completely Beside Ourselves (apart from the Rumer Goddens, natch).

Happy New Year to you all. I'm hoping for a happier, less dramatic 2016. A steady-as-she-goes year would be nice, thanks!
Posted by A latte beckons at 11:27 AM