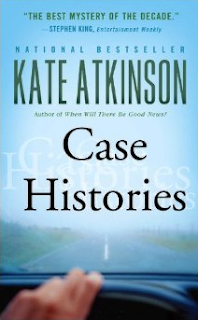 Thinking it was an upmarket family drama, I gave my mother Kate Atkinson's Case Histories to read to distract her while my father was in hospital after a massive stroke. Nearly two years later, I finally got around to reading it myself and I was horrified. The first three chapters describe three disturbing crimes -- two murders and a child abduction. It's not a family saga, it's a mystery/crime novel! Not at all suitable reading for someone whose life had just been turned upside down by a sudden and shocking blow of fate...

Fortunately, when I asked Mum, she said she couldn't remember a single thing about it. And it must be said that her principle reading for months after Dad got sick was one Agatha Christie after another, so perhaps a crime novel was a good idea after all.

I'm a bit sad for Mum that her memory of this book has been wiped, because it's really good. Kate Atkinson slots comfortably into that category of absorbing, engaging, intelligent fiction -- not pretentiously literary, not annoyingly dumb -- just a really solid, well-crafted, thoughtful, adult story. Anne Tyler, Liane Moriarty, maybe even Rumer Godden are other authors of this ilk who spring to mind.

Case Histories deftly weaves together three seemingly unrelated crimes, with the emphasis on character, though the plot lines are strong too. And hooray, it's the first of a series of mysteries featuring ex-policeman, now private investigator Jackson Brodie, so I'm off to the library to dig out some more.

PS Oddly enough, at one point in Case Histories Jackson and his daughter visit Bamburgh beach in Northumberland, which also featured in A Song for Ella Grey, as the camping site for Ella and Claire and their friends, and the place where they first encounter the mysterious Orpheus. Checking out some images on Google, it does look like a magical place. One of those odd reading coincidences!