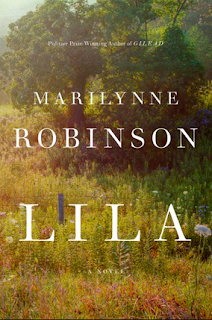 The beginning of a new year finds me in a reflective mood, so what better choice for my first book of 2017 than a novel by Marilynne Robinson, one of the authors I most admire. Though she's written only four novels, they each contain such depths that I could study them forever.

Lila is the third book to deal with a small cast of characters living in the tiny Iowa town of Gilead in the 1950s, but this one has a very different voice. For the first time John Ames' much younger wife, Lila, a fleeting, mysterious figure who has appeared only at the edges of the other novels, takes centre stage. Lila has suffered a difficult life; she is damaged, wary, mistrustful. But when she encounters Reverend Ames, 'that good old man,' it is a gift of unexpected grace and love for both of them. Gradually the story of Lila's previous life is peeled back; very slowly she learns to love and, much harder, to allow herself to be loved.

Gilead, Home and Lila form an extended meditation on what Ames calls 'the mysteries of existence,' and there are no easy answers. Ames, his old friend Boughten, Boughten's estranged son Jack and dutiful daughter Glory, and now Lila, all find their own reasons for carrying on. There is always pain and loss, sacrifice and betrayal; but there is also tenderness and passion, kindness and beauty, the sweetness of the seasons passing.

As I sat down to write this post, I spilt coffee over my copy of Lila, and also on Gilead, which I skim-read again last night to remind myself of how Lila appears in that novel. I can't tell you how cross I am with myself for spoiling these beautiful, thoughtful books with my carelessness. But in a way, it seems almost fitting to the message they carry that the books themselves should now be marked and imperfect, but still precious to me.