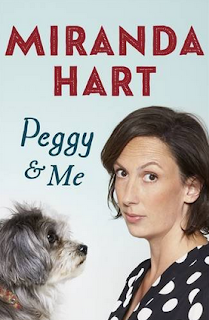 We ADORE Miranda Hart at our house; her self-titled sit-com is one of those rare things that we can all enjoy together 'as a family,' as it very much were (slipping into Miranda-speak there). There is something about Miranda's loveable awkwardness, her very English self-deprecation, that we all relate to. We went to see her stand-up show when she was in Australia a couple of years ago, though Evie was the youngest person in the audience by several years, and it was a fabulous night.

So now Miranda has written a memoir about her gorgeous dog Peggy -- what a perfect Christmas present for Evie, and obviously Father Christmas agreed. Poor Miranda actually wrote this book twice -- the first time she finished it, her laptop was stolen just before she sent the final manuscript to her publisher! What a nightmare. But this re-written version is a sweet, funny, surprisingly philosophical read. Miranda has learned many lessons from Peggy, which other dog-owners will relate to: mindfulness, relaxation, playfulness, and even trust in a higher power. She acquired Peggy at a low point in her life, and found that caring for her dog re-connected her with the world and helped to lift her out of depression.

This is just a lovely, light book, like having Miranda chat in your ear -- and charmingly illustrated with pencil sketches. What-I-call, an absolute treat.