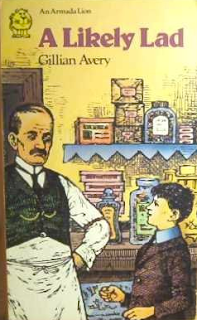 A birthday present for myself from Brown and Bunting! This poor old paperback from 1973 (first published in 1971) is foxed and mottled and probably lay in a cardboard box in somebody's garage for the last forty years. But I welcome it gladly into my collection.

I hadn't read A Likely Lad before, and it's set in the familiar late 19th century Gillian Avery milieu. Avery does a wonderful line in diffident children, which appeals to me hugely as a diffident child myself. Her protagonists are tormented by domineering adults, mortified by impudent siblings, and agonise over their own perceived failings. This time our hero is Willy Overs, a quiet, school-loving boy who is saddled with an ambitious father who dreams of Willy ascending the social ladder as a bumptious 'thruster'. Poor Willy knows that he doesn't have it in him, but while the adults around him feud and squabble, Willy's own innate kindness and sense of fairness end up winning the day in unexpected fashion.

I really enjoyed looking up the streets and suburbs of Manchester where this book is set. I discovered I could even see the imposing Manchester Town Hall, which plays an important symbolic part in the story, in impressive 3D! What did we do before Google Earth? I've consulted it for Boneland, Call the Midwife and now this novel, and it's added to my reading experience immensely -- not quite as good as visiting the setting, but still pretty satisfying.