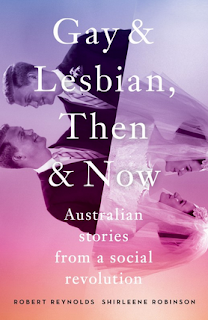 Gay & Lesbian, Then & Now, by Robert Reynolds* and Shirleene Robinson, is very topical, with the "voluntary postal survey" hanging over us (at the time of writing, the High Court is due to decide this afternoon whether it will go ahead). It's based on a series of oral history interviews, ranging from Merv in his eighties to Alex in her early twenties, and traces the evolution of Australian society from a world where homosexual acts were illegal (for men) and gayness was seen as either a crime to be prosecuted, or at best, an illness to be "cured," to a world where it's possible to grow up gay without experiencing any significant stigma at all. (Mind you, the last is possible only in the enclaves of the socially progressive inner suburbs -- which is where we happen to live!)

Through thirteen individual stories, the interviewers skilfully explore a variety of histories and personalities to build a fascinating picture of the differences and similarities in the gay and lesbian experience. For most interview subjects, the overwhelming desire is to be accepted as 'normal' and 'ordinary' -- a desire which is starkly articulated in the campaign for marriage equality. However, as a person on the fringes of the queer scene in the 1990s, I well remember a time when that desire would have been seen as a betrayal of the radical queer agenda -- why settle for normal and ordinary when you could start a revolution? The authors do touch on this dilemma, but it doesn't seem to be shared by many of their subjects.

This is a totally engaging and illuminating read.

*Full disclosure: Robert and I were close friends who met at college and later shared a house for several years.
Posted by A latte beckons at 12:49 PM