The Game of Silence 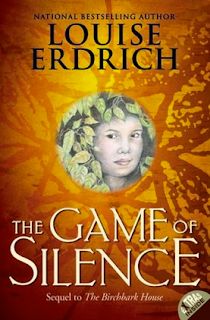 After reading Bruce Handy's Wild Things, I rushed to track down Louise Erdrich's Birchbark House series, which tells a Little House on the Prairie-style story from the Native American point of view. Annoyingly, my local library doesn't hold any of Erdrich's children's titles (though they have four or five of her adult novels). And when I tried the Kindle, they had the whole Birchbark House series -- except the first one! Why???

So because I'm impatient, I settled for buying the second book, The Game of Silence, just to get an idea of what they are all about.

Nine year old Omakayas (Little Frog) is part of a nineteenth century Ojibiwe community living in what is now Minnesota. Though the story mostly deals with the daily chores, seasonal tasks and special events of the year, the background is sombre -- four representatives have been dispatched to discover the white government's policy and whether their treaty will be honoured. No surprise at the end of the book when Fishtail returns to report that the promises have been broken and the Ojibwe must leave their traditional lands.

This novel did remind me very much of the Little House books, with their positive outlook on the small struggles and victories of daily life, with a grim backstory. And they are a necessary corrective to the one-sided account of the Ingalls Wilder tales, where the "Indians" are at worst a terrifying threat, and at best, exotic aliens. One of the most striking scenes of the Little House series occurs at the end of Little House on the Prairie, when a long line of Osage ride past the Ingalls' cabin, proud, silent and utterly alien. The Birchbark House series gives a lively voice to those silenced people, and in these books, it's the chimookomanag, the white people, who are the alien strangers.