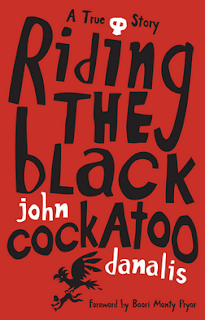 It's been almost ten years since I first read John Danalis's Riding The Black Cockatoo, but I well remember the deep impression it made on me at the time. I was working on Crow Country, and my editor at Allen & Unwin recommended it to me. Later that year I was lucky enough to meet John himself at a festival, and he was just as lovely as he seems from this book. And it was through his involvement in the events of Black Cockatoo that I made contact with Gary Murray, who so generously consulted on my own novel.

Riding The Black Cockatoo is a truly extraordinary story. John grew up in a house filled with weird and wonderful curios -- including the skull of an Aboriginal man (nicknamed Mary) on the mantelpiece. From the moment it first dawned on adult John that something should be done about this, that the remains should be returned to their original resting place, events seemed to gather their own momentum. It so happened that a return of remains to the right area was about to take place, just in time for Mary to be included; the right people appeared at the right moment, a rare black cockatoo greeted John as he rode through the bush, instinct (or the universe, or the spirits) seemed to lead John down the right path.

It's a deeply moving and poignant journey, which took an immense personal toll on John himself, which he frankly recounts -- as if echoes of all the pain of dispossession and cruelty is visited on his own psyche. This book helped to open a window on Indigenous culture for me. I think it should be compulsory reading in every classroom, and for every Australian adult, too.