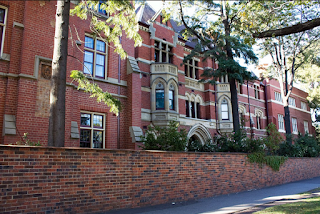 Residential colleges have been in the news. Horror stories of bastardisation, bullying, cruel and demeaning 'initiation ceremonies,' a culture of alcohol abuse and sexual misconduct.

I spent my first two years at university living in a residential college. It was a long time ago, more than thirty years -- generations of students have passed through 'my' rooms since then. I too heard horror stories, mostly from the larger colleges (the ones that used to be males only). I had the impression that the smaller colleges, like mine, which had previously been women's colleges, had a more healthy atmosphere.

Sure, we did some stupid things, things that might be frowned upon these days. During Orientation Week, after a chicken and champagne breakfast, we 'freshers' were asked if we'd like to swim across the Yarra, and a handful of us were dumb enough to volunteer. But we were asked, not coerced, and we were picked up on the other side. (I only just made it.) We stood on the roof and dropped water balloons on fellow students returning from the pub. We partook in a mid-year scavenger hunt which involved, frankly, the theft of private and public property. There was a lot of free alcohol sloshing around, and not everyone handled it well. Actually, no one handled it well.

It wasn't until the novelty had worn off and I made friends with some older, more cynical residents, that I recognised the unhealthy aspects of college life: the reckless encouragement of binge drinking, the sexist attitudes of some of the male students, the superficial categorisation of residents as 'good blokes' or 'sluts' or 'dags' or 'up themselves.' But I made some lifelong friends, and I learned a lot, about life and love and myself -- not much about law, though, which I was supposed to be studying. Mostly  my experiences were positive, but two years was enough for me.

It was like no other time of my life. I took risks I never would have taken otherwise, befriended people I never would have met on campus, had my first sexual encounters (some great, some terrible), lived with strangers for the first time, fell in love with unsuitable people, made enemies, lost control sometimes, learned to say no. And while I certainly wouldn't wish on anyone the kind of abuse that I've read about, for me, some of the negative college experiences were the most important ones.