Those Who Leave and Those Who Stay 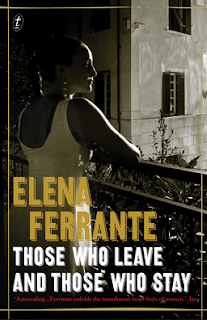 I needed a couple of breaks to make my way through this, the third volume of Elena Ferrante's Neapolitan novels. As usual, I found the first fifty pages hard going, but then it was a race to the finish.

The two friends, Lena and Lina, are now adults, negotiating relationships, children and careers. At the beginning of the novel, life is looking rosy for the narrator, Lena, whose book is a success and who is about to marry into a distinguished academic family. It seems she has escaped the old neighborhood with its deep-rooted, sordid power struggles. In contrast, her friend Lina seems to have made all the wrong choices -- she's run away from her husband after a failed affair, working in terrible conditions in a sausage factory, supported by a childhood friend, Enzo, whom she does not love.

But soon enough the scales begin to tilt the other way. Lena finds herself suffocating in domesticity, her brief moment of fame snuffed out, while Lina and Enzo are successful early experts in computers. The neighborhood reaches out its tentacles around both of them as Lina decides to work for the shady Solara brothers and Lena's first unrequited love, Nino reappears to throw her life into chaos...

While My Brilliant Friend was confined to the handful of streets that comprised 'the neighborhood,'
The Story of a New Name broadened the canvas to include the whole of Naples. Those Who Stay and Those Who Leave widens the focus still further as Lena moves to Florence, and the characters are engulfed in the conflicts of 1970s Italian politics, battles between fascists and communists, the elite, the criminal classes and the workers. Fittingly, the book ends with Lena aboard an aeroplane for the first time, heading for France -- will the final volume moe out of Italy to encompass other countries?

I'm going to the library today to pick up The Story of the Lost Child, so I'll soon find out.