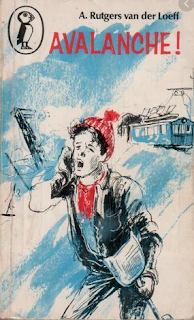 It feels timely to be talking about a book that deals with natural disaster, community, courage and selflessness in the face of danger and uncertainty.

Though set in Switzerland, Avalanche! was published in Holland in 1954 and subsequently translated into English in several editions. Anna Rutgers van der Loeff sets her story in a small Swiss village in an unusually heavy winter, where even a shout can bring a deadly avalanche of snow roaring down the mountainside to bury houses and people. In Australia we are more familiar with fire and flood as natural disasters and I've never really considered the perils of avalanche (I've spelt that word wrong every time I've typed it). Precautions like carrying lengths of coloured rope, so that people know where to dig for you, were all new to me.

There is lots of action here but the heart of the story is centred on the boys of the Pestalozzi Children's Village who had travelled to the Alps for a skiing holiday and become caught in the disaster. I'd never heard of these villages, set up for war time orphans, but they still exist to provide homes for displaced youths. These boys, from a variety of nations, speaking different languages, have formed a family of sorts and in turn they connect with the local boy, Werner, whose parents and little sister  have been buried in an avalanche early in the book. The friendship between stoic Werner and excitable Italian Paolo is the true core of Avalanche!

I would like to hope that in the current crisis, we could all show the bravery, fortitude and practical compassion displayed by the characters in this book.
Posted by A latte beckons at 8:42 AM