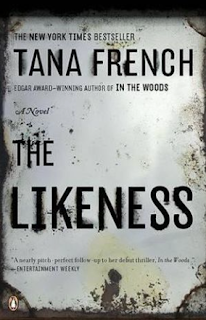 I seem to be working my way backwards through Tana French's back catalogue: The Likeness is her second novel, and part of the Dublin Murders series currently screening on SBS (which I've managed to hold off watching so far...)

The Likeness opens with a bit of a gimmicky premise -- a murder victim who just happens to be a nearly exact double for a Dublin detective, who then goes undercover as the victim to discover the murderer. That notion was pretty hard to swallow, but once I accepted it, there was lots to enjoy. This is the third book of French's (The Wych Elm, The Secret Place) that has featured a beautiful, tight-knit, idealised group of young friends in a beautiful, slightly shabby but gorgeous setting (a private school, a run-down mansion), so this is obviously a theme that appeals to her. It appeals to me too, and The Likeness is perhaps its most perfect iteration.

Like Cassie-posing-as-Lexie, I was seduced by the world of Whitethorn House and its brilliant, socially dysfunctional student inhabitants, though I found it hard to believe, however close the resemblance and however many phone videos the victim had helpfully provided for Cassie to study, that she could really impersonate Lexie so perfectly that the others didn't suspect something! This book is all about identity and pretence and secrets and turning yourself into somebody else -- Cassie falls so far down the rabbit hole that she has trouble pulling herself out.

The Likeness was such a rich, luxurious, though ultimately really sad, read. I absolutely wallowed in it.
Posted by A latte beckons at 10:24 AM