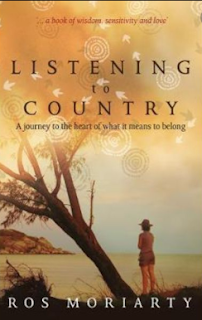 Listening to Country is a memoir by Ros Moriarty, who is a white woman married to an Aboriginal man, John Moriarty. In 2006, she was taken on a journey to country, deep in the desert, with members of her husband's family, and included in traditional ceremony. The book is partly an account of that trip (excluding ritual details which need to remain secret), and partly the story of hers and John's marriage and their very successful design business, which has brought Aboriginal imagery and colour to everyday Australians and the world (they designed the Qantas planes with the indigenous paintings, among many other things).

Moriarty is aware of her privilege, both as a white woman, and as a welcome member of her husband's extended family. Listening to Country is her sharing of the insights and experiences she has gained from family, and also a sharing of their personal histories, stories which remain largely hidden from many Australians.

One element that made me sad was Moriarty's conviction that the time of deep connection to country is coming to an inexorable end -- that when these old women and men die, ritual, ceremony and knowledge will die with them. I'm not so sure -- my recent readings of Tyson Yunkaporta and Bruce Pascoe, among others, give me hope that these traditions are still highly valued and that real effort is being made to preserve and build on them. I really hope so. In these days more than ever, humanity is crying out for a closer connection to country, to the swing of the seasons and the balance of the natural world. Indigenous Australians have so much to teach the rest of us and this knowledge is more essential than ever. I feel as if we are, at last, almost ready to listen. Or maybe I just spend too much time on the ABC?
Posted by A latte beckons at 11:57 AM