Seven Seemingly Bad Ideas That Turned Out Better Than Expected
1) letting Evie play on the computer when she was 18 months old. 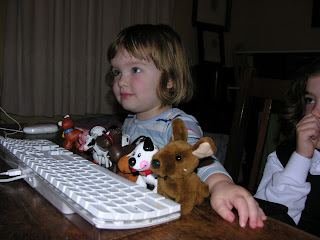 2) allowing Alice to do "experiment cooking"; now we have cake every day.

3) adding two feet to the width of our new room; this last-minute decision delayed the build by 6 weeks but it's been absolutely worth it.

4) the acquisition of Rex; I was not sold on the idea of adding a lizard to our family, but now I am very fond of the little guy.

5) the combination of rice, baked beans, yogurt and tom yum sauce (a nourishing and surprisingly tasty meal, invented in her student days by the distinguished composer, Christine McCombe).

6) the recruitment of Barry Hall by the Western Bulldogs.* He's not a thug! He's a gentle giant! And a goal machine! Go Big Bad Bazza!

7) becoming romantically involved with someone who was not only an old friend, but also, at the time, my boss.**

* As opposed to the recruitment of Jason Akermanis, which looked at first like a bad idea, seemed to work out okay for a couple of years, and then was revealed to be a very bad idea after all.
** Now my husband. All together now -- awww! Happy Valentine's Day, Mikey. Even though we don't believe in Valentine's Day.
Posted by A latte beckons at 9:18 AM