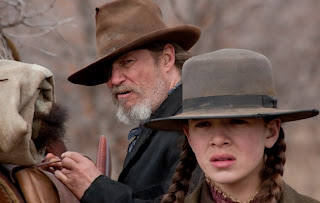 Last night the girls went to see Mary Poppins with their grandmother (they said it was amaaazing!), and Michael and I went to the movies. True Grit is possibly the first western I've ever seen, definitely the first I've been to see at the cinema, and I wasn't sure whether I'd enjoy it. The body count was pretty high, as one would expect from the Coen Brothers, but as the film unfolded, I couldn't help thinking, I wish I could take my daughters to see this movie.

Mattie Ross is just the best heroine ever. She is a 14 year old girl in a world of grizzled, hard-bitten outlaws and lawmen, but she more than holds her own. She is smart as a whip, brave and determined; she gives as good as she gets, and nothing deters her. She wants to see her father avenged, and she won't rest until she makes it happen, and on her own terms. Even with the blood and guts, I would much rather my girls saw Mattie Ross negotiating terms with a horse trader, shooting at bad guys and cutting a corpse from a tree, than some wilting school girl swooning over her undead lover.

* Edit: the award went to Melissa Leo. Oh well. So Jacki Weaver missed out too. But hooray for Shaun Tan and The Lost Thing!!!
Posted by A latte beckons at 12:50 PM