2) removing the underwire from my bra.

3) serving my family a dinner that was basically cauliflower cooked three different ways; they were not impressed.

4) going to Paris by myself.

5) buying Converse runners so I could be just like the Tenth Doctor; I hope his feet don't hurt as much as mine do.

6) getting a soft fluffy bathmat, which has never dried out completely since the day we bought it.

7) giving Evie a security blanket, which, six and a half years later, looks like this: 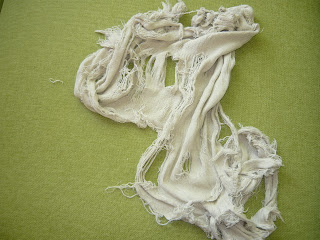 ... is best described as a filthy rag, and sheds worse than a sheepdog.
Posted by A latte beckons at 10:04 AM