Meanwhile, Down At The Kennel... 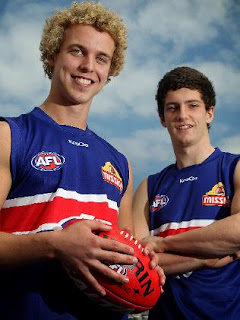 This time last year there was a lot of excitement in the Kennel. The Western Bulldogs had just won the NAB Cup -- the first time we'd won anything since 1970 (and even that was only a night grand final). Our new recruit, Big Bad Bustling Barry Hall, was red hot, and the Doggies were favourites -- yes, favourites! -- to win the 2010 flag.

Well, as we all know, it didn't quite work out according to plan. The wheels fell off late in the season, partly due to injury and illness. But also our elderly, if distinguished, forward line looked slow and ineffectual (apart from Bazza, who kicked an alarming total of 80 goals to finish second for the Coleman Medal). We finished fourth, which was probably about what we deserved, and the Magpies marched off with the premiership.*

On paper, this season looks less promising. We've lost our fearless and beloved captain Johnno, and the experienced premiership player (among other things...) Jason Akermanis, and the brave servant Nathan Eagleton. There's about 500 years worth of experience gone, right there.

But down at the Kennel, while we're not as hysterically excited as last year, a quiet confidence is bubbling away. We have some special new pups to add to the pack. Mitch Wallis and Tom Liberatore are the talented sons of club legends, and while they're young, they're already looking pretty good. (That's them pictured above. Wallis is the one with the blond curls.) They've been friends and team-mates all their lives. Aww! And our new captain, Matthew Boyd, played in the same team as Little Libba's dad. How about that.

And we've unearthed the Z-Man, the Bullfrog, the Z Factor: Zephaniah Skinner, who has an electrifying leap. Hey, he can jump over Barry Hall's head! Overall, the team looks faster, younger but just as skilful.

Here's hoping for a good year for the Bulldogs. Maybe it's a good sign that just ending up in the finals again will feel, not like an acheivement, but a disappointment. Come on, Doggies -- take it all the way!

* By the way, Collingwood fans -- please don't whinge and moan about how you had to wait soooo loooong between flags. Twenty years? Please! To us patient souls at the Whitten Oval, that's a blink of an eye. Try waiting for FIFTY SIX years and see how you like that...
Posted by A latte beckons at 10:17 AM