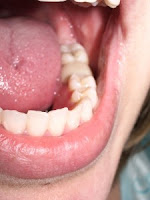 Alice had ten teeth taken out this week. Some were rotten, some were crowded or crooked baby teeth, and have been removed to allow the adult teeth to come through straight (we hope).

It was a big operation, bigger than we were really prepared for, and the scene in the recovery room was like something out of The Exorcist. I think I've watched too many post-operation scenes from Days of Our Lives; I guess I pictured my little girl waking up quietly, pale and interesting, in a hospital bed, perhaps whispering vaguely, 'Where am I?' while I stroked her forehead reassuringly.

Well, she was definitely pale -- her face was as grey as a plateful of porridge. Interesting? Yes, but not in the way I imagined. Blood-soaked gauze spilled from her swollen lips as she thrashed about in post-pethidine delirium. 'Water!' she croaked. 'I URGENTLY need water!' (At that point I was relieved to note that the anaesthetic hadn't damaged her personality.) I started to feel rather ill myself, and managed to pass her to her father before I keeled over. Luckily for me, I thus avoided the projectile vomit she then sprayed over everyone else in the room (mostly blood she'd swallowed during the procedure). Groggy and drooling, eyes rolling in her head, she lolled in her father's arms while I tried to pull myself together.

Three days on and we are all feeling much better. It's helped a lot that she's become something of a celebrity at school. A crowd of well-wishers has hung over the school fence near our back gate at recess and lunch-time, calling her out into the laneway, and on the second day, our garden was invaded by all her friends, who came spilling over the fence to visit.

So now my main problem is coming up with ideas for soft food. There won't be any chewing for a while.
Posted by A latte beckons at 11:57 AM