Lately Alice has started to watch a rather disturbing show called Hoarders. These poor people are in the grip of a compulsion to acquire, and keep, all kinds of junk, to the point where their houses are so crammed with stuff that they become almost uninhabitable. During a long-overdue clean-up, one woman discovered the flattened, mummified remains of two of her pet cats, which had 'disappeared' some years earlier; they had wandered into the maze of junk, become hopelessly lost, and died. 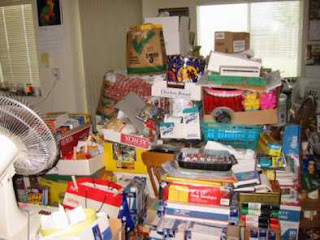 It's desperately sad for those involved, and their families, but I can't help also thinking of this programme as an allegory for Western capitalism. Our urge to consume and acquire huge, unwieldy amounts of useless crap is slowly choking our planet.

I suspect that Alice is fascinated with this show because she has a little bit of the hoarder in her.* She adores garage sales, hard rubbish, and op shops; abandoned objects call to her. She wants to pick them up and love them. We have an attic full of stuff that Alice has 'rescued.' Her favourite walk at the moment takes in a visit to a $2 shop in High St, Preston, swinging by Savers on the way home, where she scours the street for detritus that donors have spilled. Last week she picked up a (rather gorgeous, I must admit) remnant of beaded chiffon, a single high heeled shoe, and a tiny baby's shoe ('But Mummy, it's adorable!') Then she discovered a vacant lot. She peered through a gap in the fence and her eyes gleamed. 'Oh, Mummy, please! It's an absolute treasure trove!' To my jaded eyes, there was nothing particularly appealing about the soggy sofa, the rotting cardboard boxes or the tattered scraps of plastic blowing about among the weeds, but I let her go and have a look around (carefully).

Luckily, she had spent her $2 wisely at the $2 shop. After half an hour of examining every item in the shop, she finally chose -- a rubbish bin.

Maybe there's hope for her yet.


* Or perhaps the collector? She loves Collectors, too.
Posted by A latte beckons at 9:48 AM