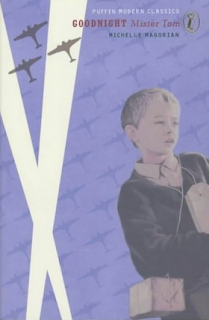 I couldn't find an image of the edition I bought from Brotherhood Books, which has a 20th anniversary sticker on it. I'd never read Michelle Magorian's Goodnight Mister Tom, first published in 1981. But when it was mentioned at my ladies' book group, and they all in unison sighed and smiled, I knew it would be a winner.

Reading this book was like sinking into a comfortable old armchair. In some ways, it's an old-fashioned odd couple story: A shy evacuee is billeted with a crusty old countryman, and as their friendship deepens and young Will settles into the community, he discovers gifts and strengths he never knew he had. So far, so predictable. But in other ways, this is quite a dark and disturbing tale. The background is the outbreak of World War II, with bombing raids and the threat of invasion in the air. More troubling is the character of Will's abusive, mentally ill mother. The severe abuse Will suffers at her hands is balanced by sunny excursions to the woods and the scenes of childhood friendship (though this too is touched by darkness).

I have previously read Magorian's later novel, Back Home, and there were shared themes with Goodnight Mister Tom -- the wartime setting, the saving power of art, an abused or neglected child, even the charms of an isolated cottage in the woods, are common to both books. I also really like the unconventional minor characters, who could so easily have been stereotyped figures -- like the trouser-wearing, smoking doctor's wife, or colourful Zach, the flamboyant child of theatrical parents.