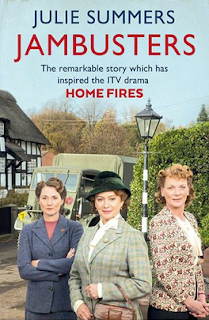 I seem to be in the middle of a World War II binge -- partly because of the Convent book group theme, partly because I went to see Dunkirk recently (which was excellent by the way). I pounced on Jambusters when I saw it pop up on Brotherhood Books (yes, I'm now checking it daily, don't judge me). This book by Julie Summers inspired the development of the TV series Home Fires, which Michael and I loved. We were extremely cross that ITV cancelled it after only two seasons, and on a massive cliffhanger, too. But that is a topic for another day!

Jambusters is the story of Women's Institutes during the Second World War. Though it was a voluntary and notionally pacifist organisation, its immense reach and breadth meant that it became the focus of many home front activities, from welcoming and housing evacuees, to making millions of jars of jam to prevent food wastage, to knitting garments for servicemen, even doing laundry and mending for local battalions. Salvage, growing vegetables, making toys, skinning rabbits -- all this on top of the usual work of caring for the family and often running a farm or business, with the men absent, as well as keeping up morale by running village entertainments like dances and choirs -- and enduring the terrors and privations of war with a calm and cheerful demeanour!

I came away from this book breathless at the sheer amount of work (all unpaid, mind you) that these incredible women were expected to shoulder. And many rural women were living in housing without electricity or even running water! Bloody hell. I can tell you, I was counting my blessings after this one. Full of wonderful details of daily life in war time, this would make a fantastic research resource. And it highlights the value of friendship and community which was the silver lining to all the suffering that they endured in six long years of war.

EDIT
PS I forgot to say that I was particularly intrigued to discover that one of the founders and stalwarts of the WI was a woman called Grace Hadow, who came from the Gloucestershire village where my aunt lives, South Cerney. My aunt tells me that the Cirencester branch of the WI that Hadow founded was unique in being based in a town rather than a village. And my grandmother was secretary of the WI in Crudwell for many years. No wonder I enjoyed this book so much! It's in me blood.