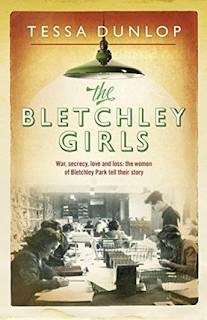 Bletchley Park was the  centre of Britain's wartime code-breaking -- a country house filled with mysterious machines (the foreruners of today's computers), boffins and hundreds of efficient service women who tended the machines and sorted the coded messages, all wrapped in an impenetrable cloak of absolute secrecy. It wasn't until the 1970s that details of Bletchley's activities began to emerge.

The Bletchley Girls collects the reminiscences of fifteen surviving women who worked at Bletchley Park. Now in their nineties, they recall their various experiences living and working at BP. For some, it was the defining period of their lives; for others, a mere blip in a long and interesting career. Everyone's Bletchley was different. Some found it friendly and relaxed, others intimidating or dull.

This sounds like a wonderful idea for a book. Unfortunately, the material for The Bletchley Girls ends up being a little, well, thin. The author quotes from interviews with her subjects, comments on what they've said, and editorialises and theorises about it. This means that the chapters become rather repetitive (not unlike the work of Bletchley itself!). And sadly the actual daily work these women undertook was mostly very boring. Though the image of BP is glamorous and exciting (code-breaking! espionage! winning the war! top secret!), in reality, the women had very little idea what they were actually doing there until decades later. They functioned as unwitting cogs in a giant machine. Though the stories of the interviewees' individual journeys to BP and their lives afterwards were marginally interesting, I didn't feel that I learned much I didn't already know, and the author's style is journalistic rather than academic (not a plus for me!)

So my World War II binge has ended on a rather anti-climactic note, I'm afraid.