The Family With Two Front Doors 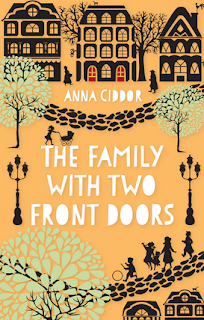 This was such a delightful book! Anna Ciddor's The Family With Two Front Doors is based on the memories of Ciddor's grandmother, growing up in the Jewish quarter of Lublin in Poland in the 1920s, one of a Rabbi's nine children. The story is small, revolving around older sister Adina's betrothal and arranged marriage to an older man; but the enjoyment of this book is in the details and rituals of daily life. It had me scurrying to find recipes for gefilte fish, sweet noodle kugel, and how to braid challah bread!

The overall picture is of a busy, happy family within a tightly structured weekly routine, though some elements might make a modern reader catch her breath -- Adina is wed at fifteen, older brother Aaron is already married at seventeen, and poor Mum has given birth to thirteen children in twenty years of marriage (four babies died).

The true poignancy of this book for an adult reader lies in the fact that we know that this way of life is doomed. A brief afterword tells us that of this large extended family, only three sisters survived World War II and the horrors of the Holocaust. Ciddor says that she wanted to preserve her grandmother's family forever as they were at their happiest, in their secure childhood, and she has achieved this beautifully.