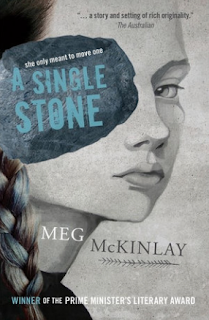 I've been meaning to read Meg McKinley's A Single Stone for a long time. It won heaps of prizes -- the PM's Literary Award, an Aurealis Award, Queensland Literary award, and was shortlisted for even more.

This is the kind of fantasy novel I really like, and it's pitched at the same level that my books always seem to end up at: somewhere between YA and middle grade, upper primary/lower secondary sort of level. It won the PM's award for Young Adult Fiction, but I don't think it's quite full-blooded YA. Not that I'm complaining (I seem to be off YA lately).

The world-building in this book is very accomplished. Generations ago, a remnant population was trapped by a landslide inside a valley, and believing that the rest of their society was destroyed, they've lived in the valley ever since. They depend for heat and energy on burning a stone called mica, which can only be obtained by creeping deep into the fissures of the mountain. This responsibility falls on young girls, but as the supply of readily available mica is used up, the Mothers need girls who are smaller and thinner and more flexible every year. Jena is the leader of the line, but when she begins to question the assumptions of her small world, she might bring everything tumbling down.

A Single Stone reminded me a little of Ursula Le Guin's The Tombs of Atuan, with its subterranean young girls and buried secrets, and the isolated valley ruled by women inevitably reminded me of Calwyn's home, Antaris, in my own The Singer of All Songs. I'm not a fan of caves and the idea of being trapped inside rock gives me the heebie jeebies, so I'm not sure that the world of A Single Stone is one I'd particularly want to live in myself! But it makes a cracking idea for a fantasy.
Posted by A latte beckons at 3:32 PM